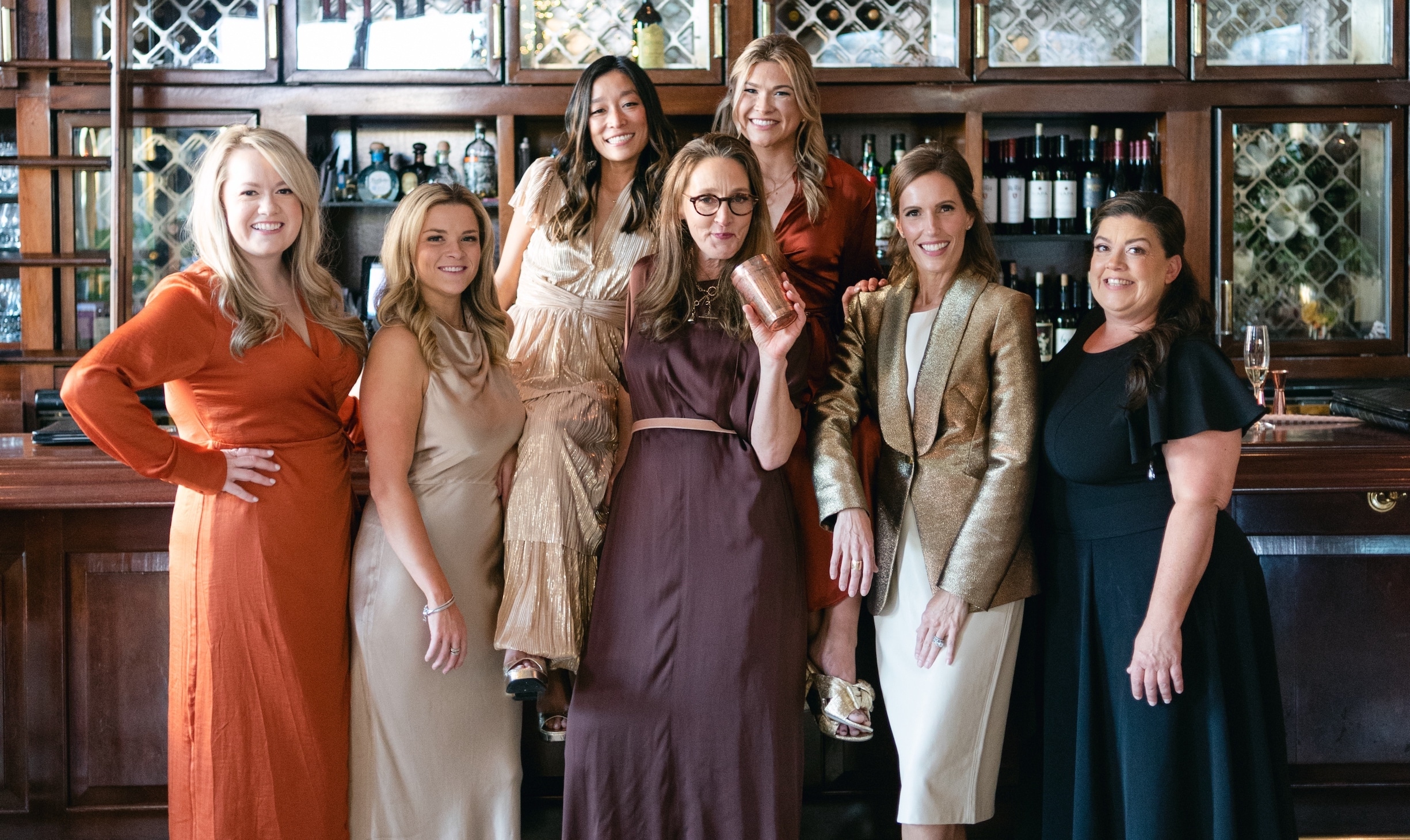 Our Team Our Location Our Process

over two
decades of
experience

Owner Tara Guérard and her "Soirettes" organize every event from either their spacious studio in Charleston or their office in Manhattan's Chelsea neighborhood. Endless excitement and energy, and more than two decades of experience make Soirée one of the most sought-after event designers in the country. 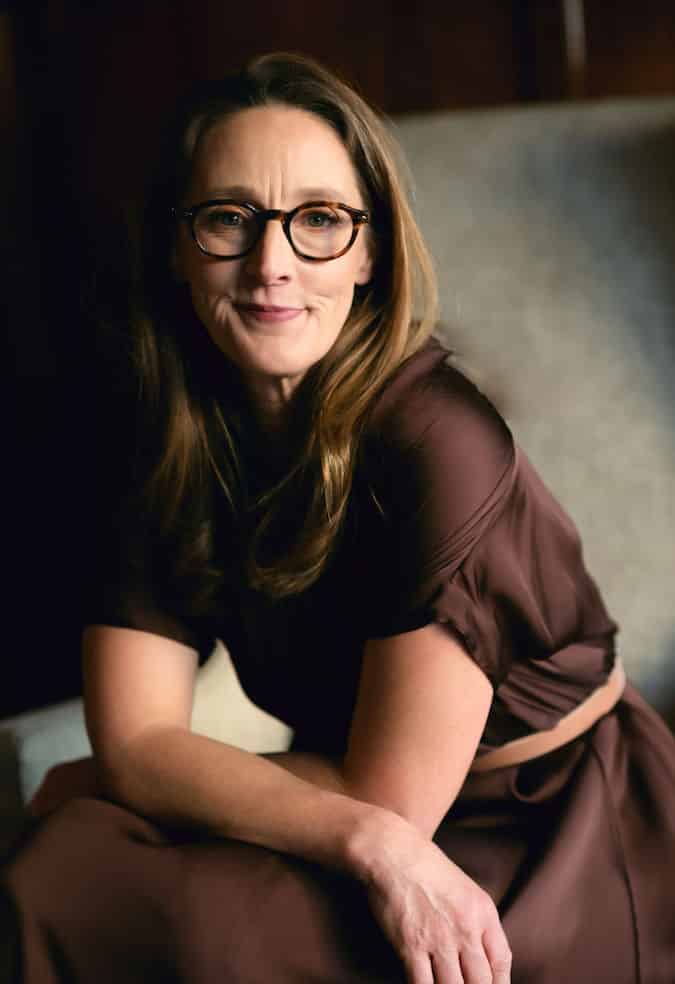 Recognized as one of the nation’s leading tastemakers, Tara Guérard has earned a widespread reputation for her exceptional ability to create spectacular settings celebrating life’s most anticipated occasions.

For over 20 years, clients across the United States and abroad have turned to Tara for her impeccably executed events infused with Southern hospitality. With a core business in event design, Tara has expanded her brand to include furniture design and her letterpress printing company, Lettered Olive. She maintains offices in both Charleston and New York City.

A noted style expert, Tara has been featured in several national publications, including Food & Wine, InStyle, Southern Living, Traditional Home, Town & Country Weddings, Martha Stewart Weddings, and Brides, and was named a top wedding planner by Vogue and Harper’s Bazaar. She has also made appearances on The Martha Stewart Show, The Nate Berkus Show, and the Style Network. Additionally, Tara is a regular on the speaking circuit, dispensing tips and advice on an array of design-related topics.

Tara lives in South Carolina, with her husband, Russell, their children, Aiken, Myers and Lila, and springer spaniel, June.

Tara’s debut book, Southern Weddings: New Looks from the Old South (Gibbs-Smith) was published to rave reviews in 2007, and her second volume, Weddings by Tara Guérard (Gibbs-Smith) premiered in early 2010, further establishing her as an authority on gracious entertaining. Looking ahead, Tara has launched on several new projects including May Cabas- handmade bicycle baskets, broadcast development, and her third book. 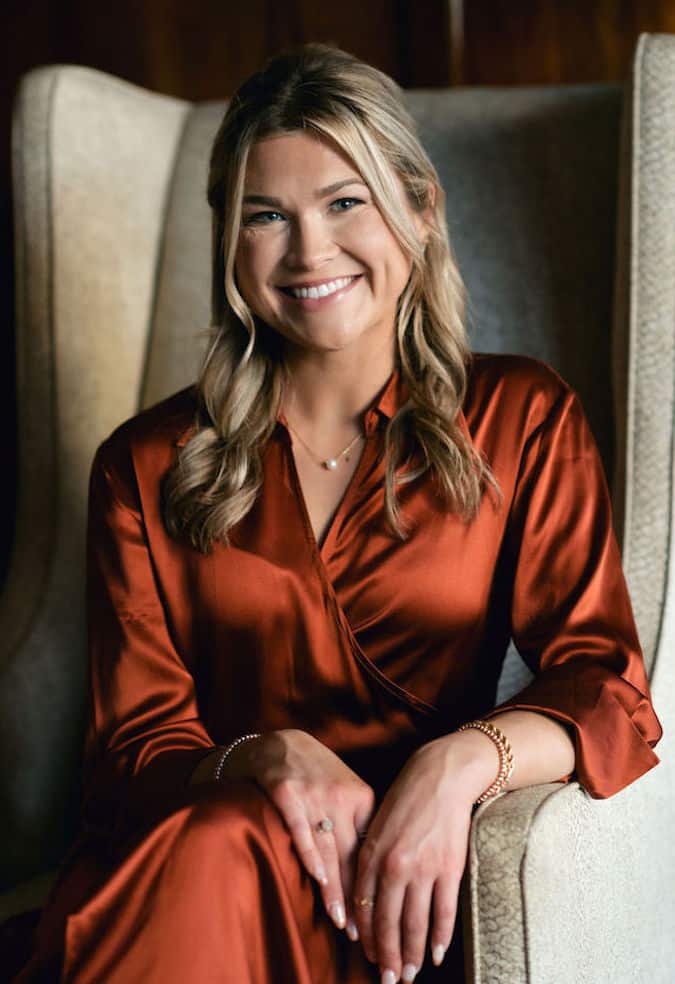 Born and raised in Richmond, Virginia, Anna Catherine graduated from The University of South Carolina with a major in Journalism and minor in Spanish. During her college career, Anna began event planning through her sorority and internships, which led her to Charleston, and she officially began her career. Anna has worked in the wedding and events industry since 2018, and since joining the team has loved learning how to do things “The Soiree Way”. When she’s not in the office coordinating with vendors, organizing timelines, chatting it up with clients, or on site at a wedding, Anna enjoys running and playing on the beach with her English Cream Golden Retriever, Winnie. Her favorite activities include boating,  hanging with friends, enjoying a rooftop cocktail at sunset overlooking the beautiful Charleston skyline, or attending a live concert with her man. 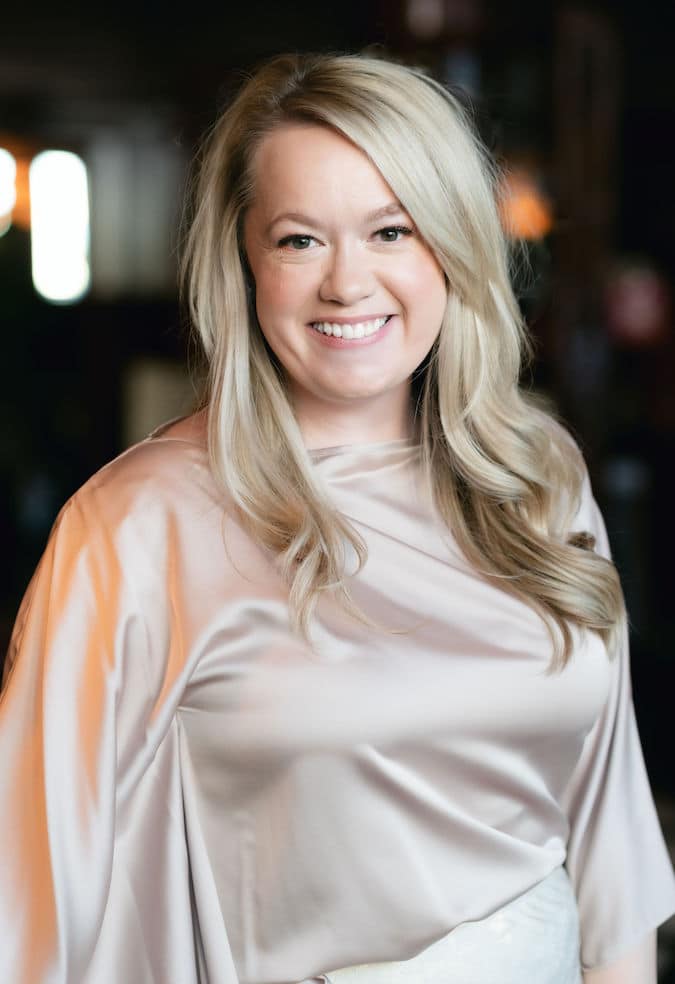 Originally from Thomasville, Alabama,  Jennifer comes to Charleston via Shreveport, LA. She attended Auburn University where she was an English major. Before entering the events world, she spent 7 years in supply chain in the oil and gas industry. She then pursued her dream by becoming a wedding and family photographer, which she still enjoys doing. In her spare time, she is always up for adventure no matter how small or large. She can turn anything into a good time, even travelling solo especially through Europe. She also loves to cook and host dinner parties. She loves having  people around and taking care of them, especially through good food and fellowship. She enjoys reading, cookbooks especially, treasure hunting/antiquing, and meeting and making new friends. 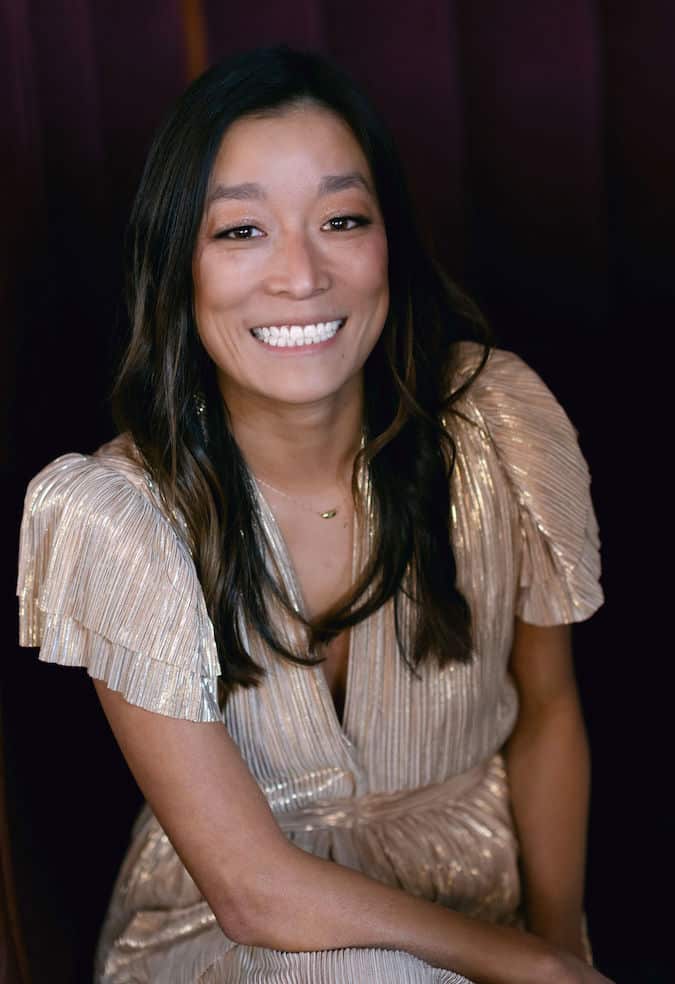 This New Orleans native has always known she wanted a job that allowed her to be hands-on and creative.  Karen developed an interest in event planning while studying for degrees in Hospitality and Tourism and Arts Management at The College of Charleston.  She further developed her skillset working as a visual merchandiser, and then learning the art of graphic design.  Karen joined Lettered Olive in the spring of 2017 and she continues to wow clients and their guests with beautifully crafted invitations, stationery and paper pieces.  Karen’s two pups (Einstein, a poodle-bichon mix and a lab-mix named Indy) are the best of friends and her beloved companions.  She and her boyfriend kick back with trips to the beach, bike rides, cooking, or just enjoying a lazy Sunday. 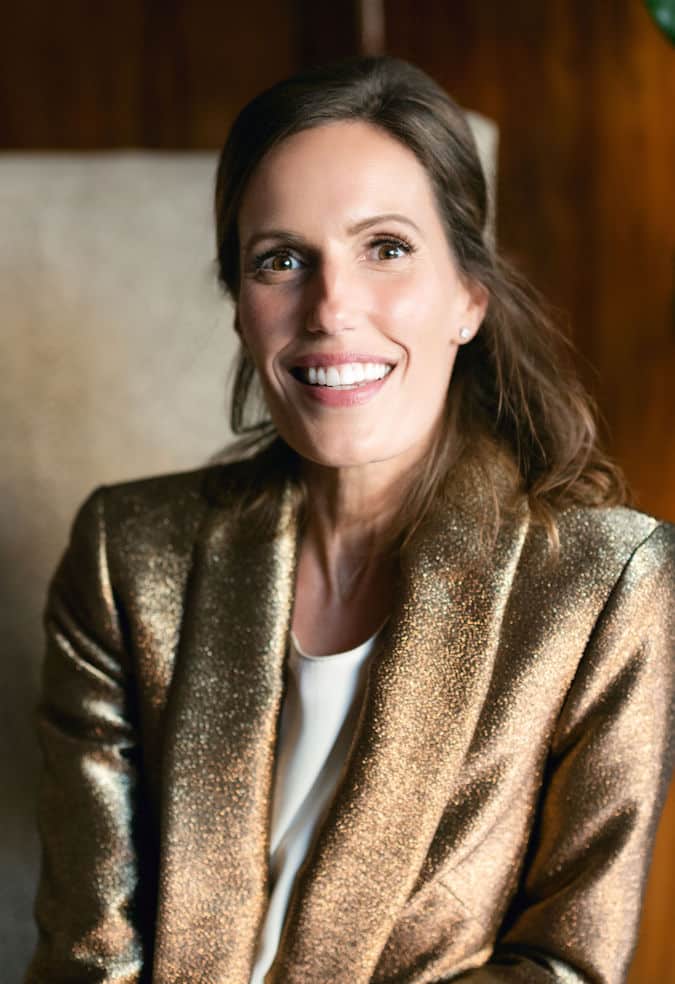 Kate Little began her career at Soirée as an Event Coordinator, and now over a decade later handles the company’s social media presence.  Kate has a well-trained eye for style and detail, and also assists with wedding production.  She lives in Charleston with her husband, Barrett, their son, Palmer, and daughter, Vivie, where they share their lives with a new pug puppy, Scarlett. In her downtime, Kate enjoys going offline to read, travel, catch some live music, visit the beach or attend a barre class. 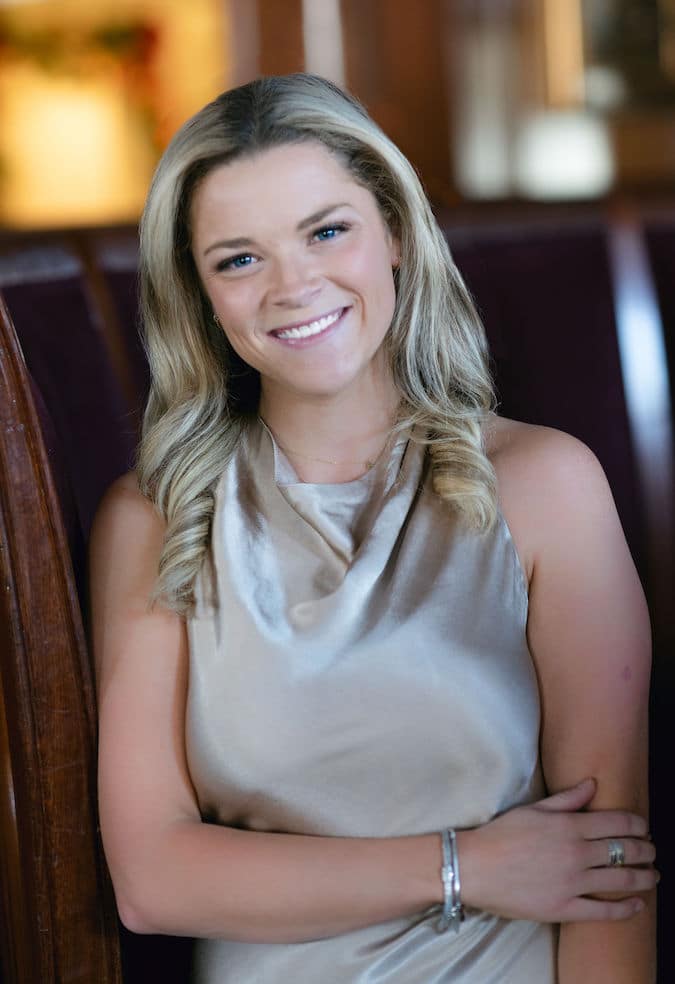 Hailing from
Montgomery, Alabama, Alex came to Charleston in
2017 to attend the College of Charleston. There, she majored in Mathematics and Computer Science. After  Graduating in May 2021, Alex combined her strong artistic and mathematical foundation into Graphic Design projects and joined Lettered Olive.
In her spare time, you can find Alex at the
beach, walking around Charleston, or out to eat with friends. 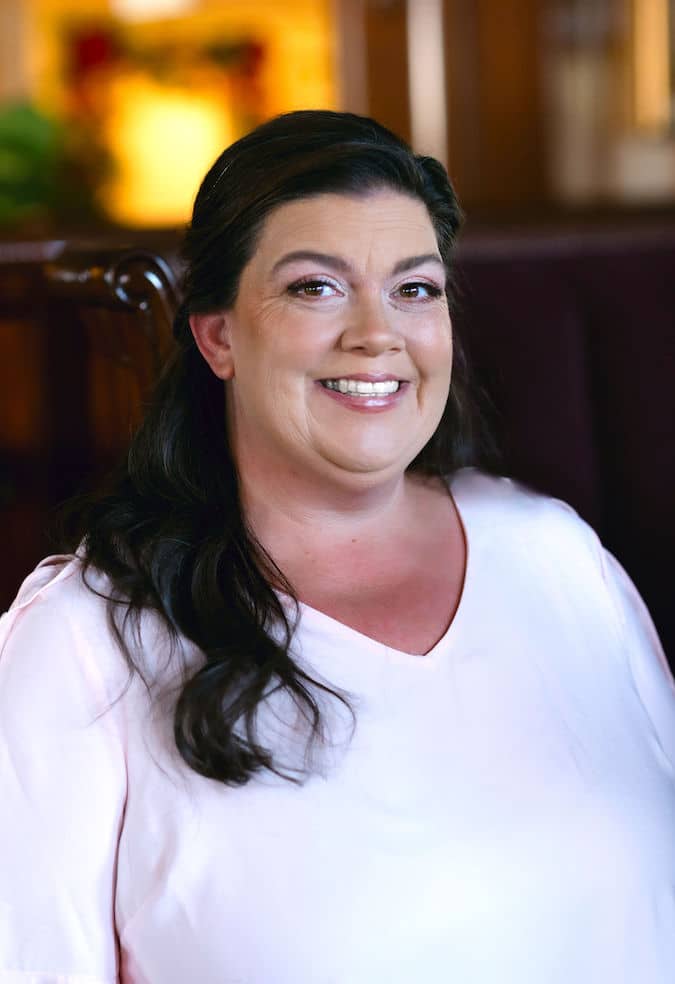 This year marks Heather’s 22nd season with Soirée, where she takes the lead on all things floral. Her favorite part of a wedding to design? The bride’s bouquet. And while she loves a beautiful peony, she’s just as happy to work with foliage and leaves, or flowers from a home garden. Heather studied business and culinary arts and worked at various floral shops before joining Tara’s team.  Out of the office, you can find Heather catching up with her friends in Mount Pleasant, at the beach or pool, or going for a walk with her pups and boyfriend. 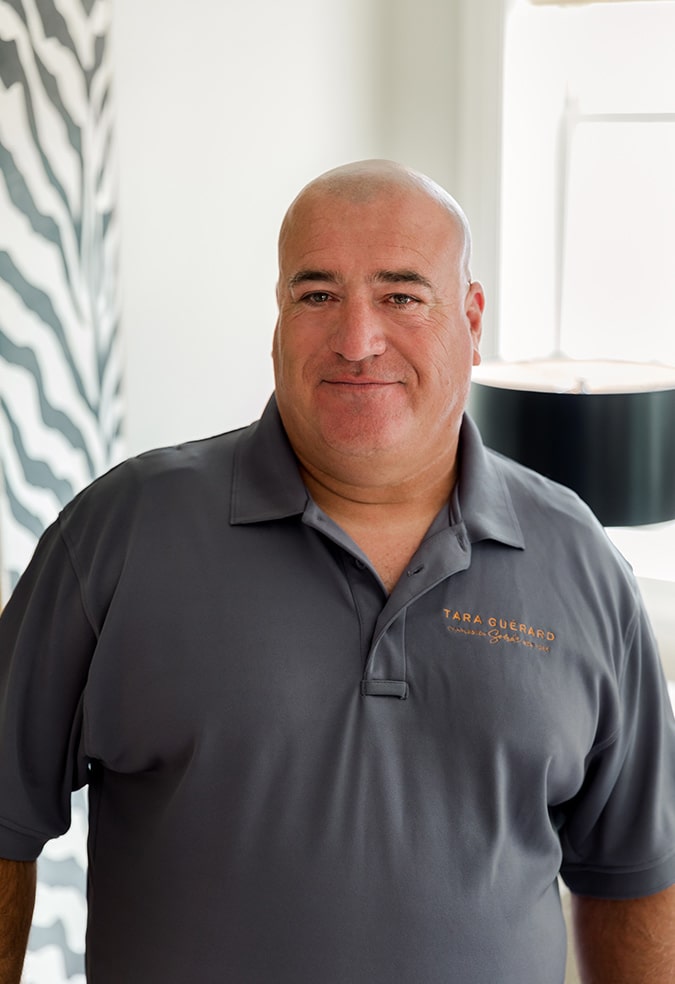 William has a storied career, with nearly thirty years of service in the fire department, more than a decade overseeing construction at the College of Charleston, and nearly as long as a rigger in the live entertainment industry.  He’s also done stints as a set carpenter for two movies.  William has been part of the Soirée team since 2005, building everything from bars to backdrops, and also ensuring events are up to code and safe for all involved.  While William grew up in Connecticut, he’s called Ravenel, South Carolina, home for many years, living there with his wife, Melissa, and their pit bull, Baloo. William loves being outdoors and has a slew of hobbies including hunting, shooting, and riding motorcycles. 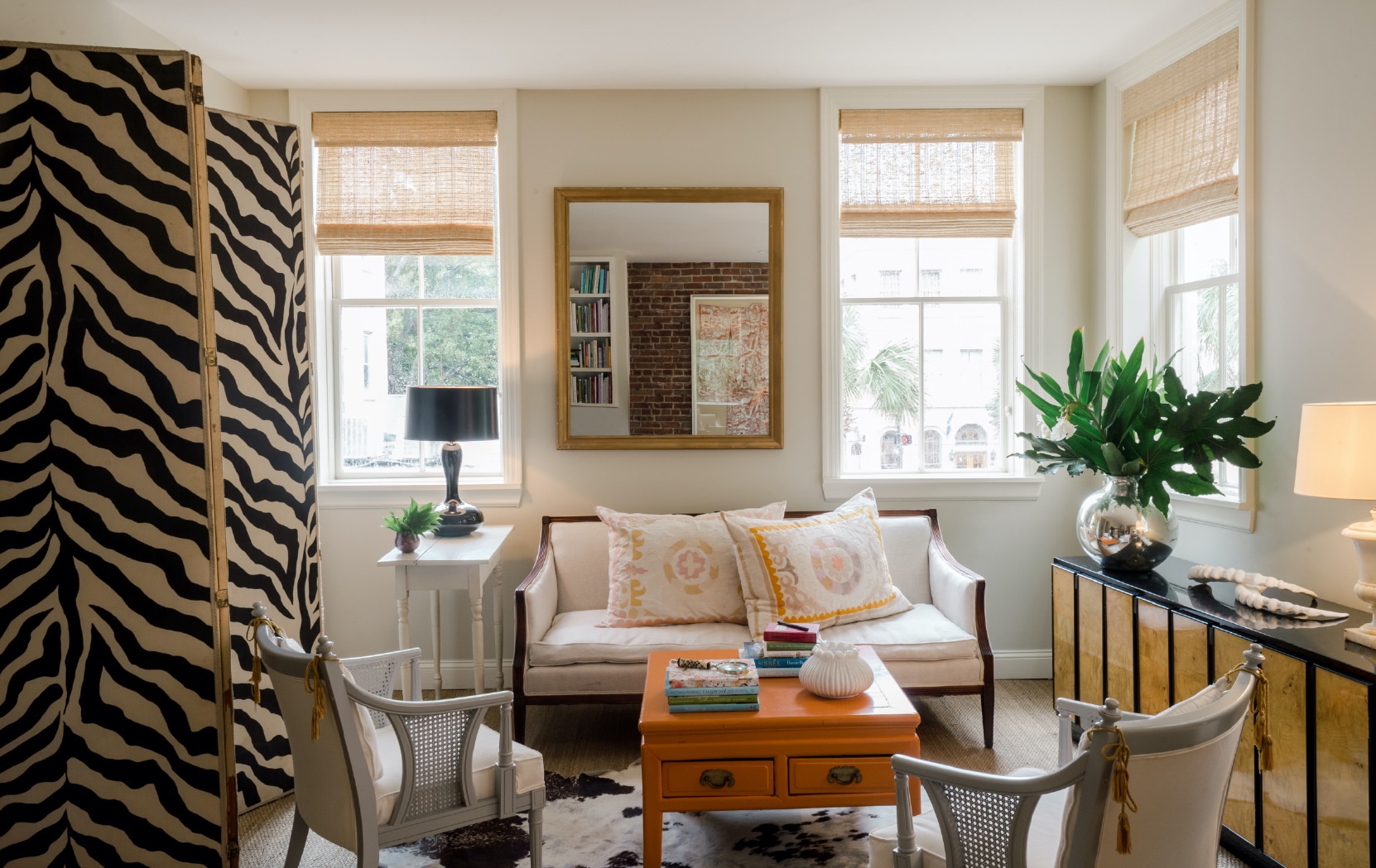 A southern city steeped in tradition and hospitality, Charleston has long been one of the nation's top wedding destinations. Open and airy, warm and welcoming, the Charleston studio is located in the heart of the historic district. 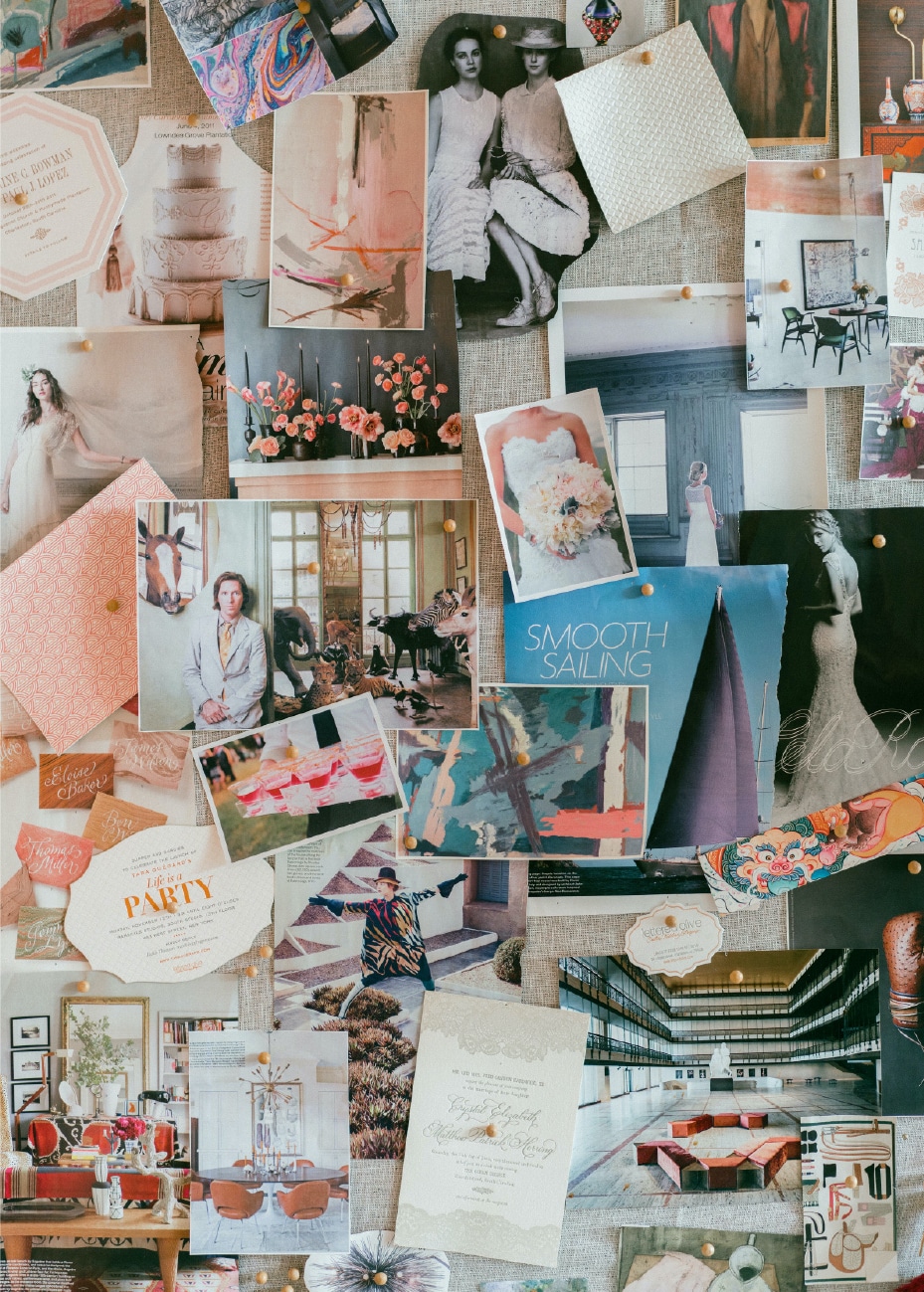 Soirée opened the New York office in 2009 in Manhattan's Chelsea neighborhood, allowing us to cater to couples across the United States. With many clients based in the city, we're able to be accessible for our brides and grooms' everyday planning needs. 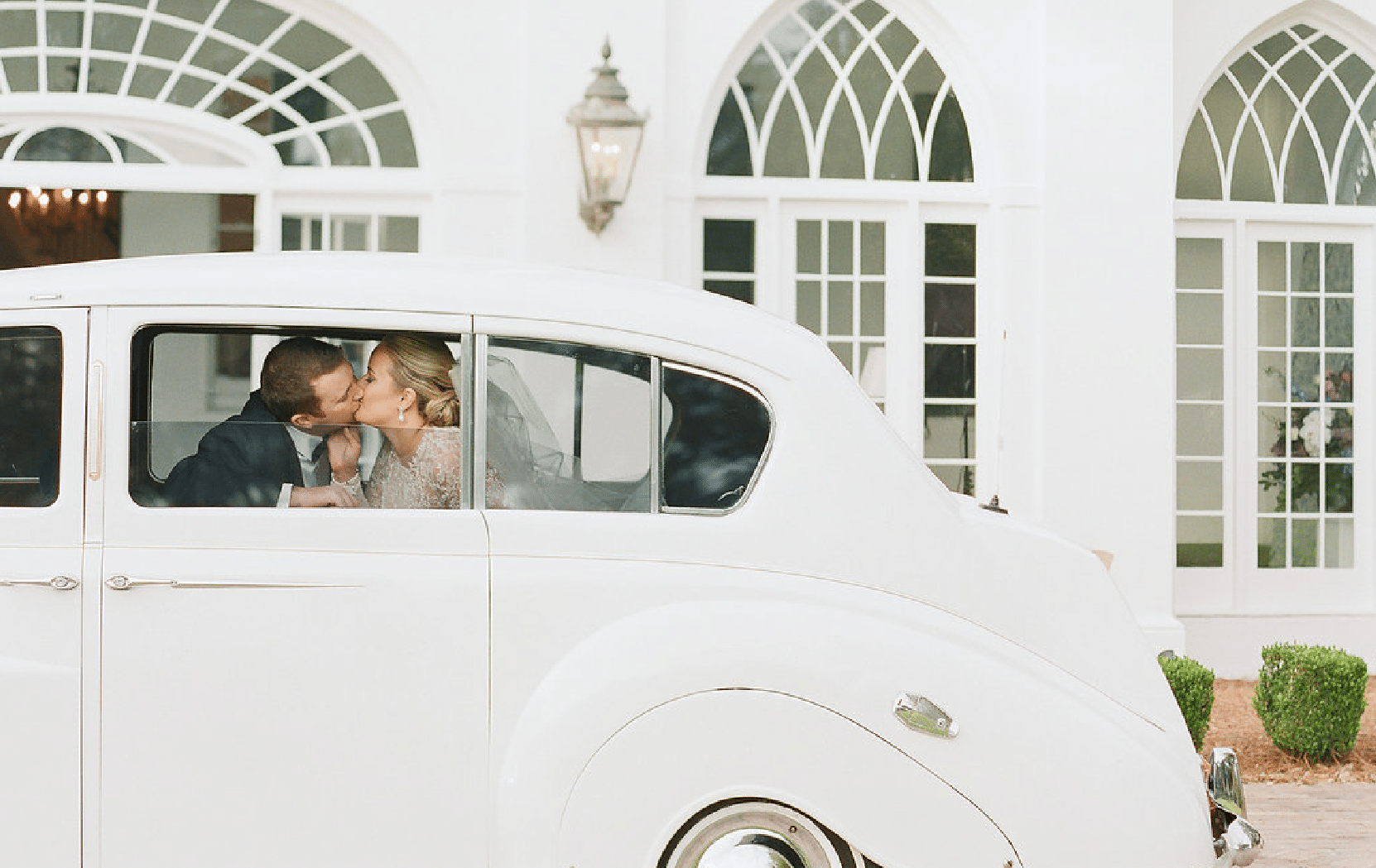 your perfect
day to be
perfectly you

Tara and team begin by determining what inspires you—from the interiors that you love to your sense of style. Armed with this information, it's then time to design every detail of your wedding with your unique taste in mind.

We know the planning process can be both exciting and overwhelming. The Tara Guérard Soirée team works closely with each of our couples to bring their vision to life and to exceed all expectations. We approach each event with fresh creativity and enthusiasm—no two weddings are ever the same! Additionally, our decades of combined industry experience ensure no detail is left undone.

Designmaking your vision a reality

A wedding is a time when the bride and groom can invite family and friends to have a peek into their newly united world. It is a day to take part in traditions, create new ones, and to share meaningful visual expressions of a couple’s new life. Tara Guérard Soirée will take your vision for the wedding and make it a magnificent reality using color schemes, floral arrangements, linens, custom paper designs, and furniture. The Soirée team will transform hotel ballrooms, historic mansions, rustic barns, seaside retreats, and any other location you can imagine, to reflect an event that is distinctively yours. Soirée sources and maintains an extensive stock of furniture, lighting, and accessories for design and décor to create signature events. We will create an event where come the end of the night no one will want to leave and everyone will agree it was the best wedding they have ever attended.

Which caterer can replicate your grandmother’s recipe? Which baker makes the perfect cake? Which photographer captures the moments you’ll share with your grandchildren? We rely on our personal and professional relationships to create the perfect day.

The Tara Guérard Soirée team is full-service, meaning we will coordinate and manage every vendor involved in your day and only use those partners that we trust to execute your vision flawlessly. All details are handled in-house so your wedding week is not spent worrying about timelines and deliveries. Our talented staff will deliver guest gift bags, coordinate travel to and from the airport, and happily assist with any and every other detail.

Our sister company, Lettered Olive, specializes in exquisite letterpress printing. We work together to create customized designs for each piece of your wedding stationery. From the moment your guests receive their save-the-date announcements, the buzz about your wedding will begin.

In an age of electronic invites and video save-the-dates, we find ourselves longing for the old art of letterpress and hand-lettered calligraphy. Invitations from Lettered Olive are modern-meets-traditional. Our team works with the most talented calligraphers and graphic designers to create extraordinary printed materials. We begin by discussing colors and design themes that can be used for everything from table décor to favor tags. Our 100% cotton paper is produced in Italy’s oldest paper mill. Environmentally friendly, these printed pieces are custom-designed and heirloom quality.

Filmed at the Drake Hotel, Chicago 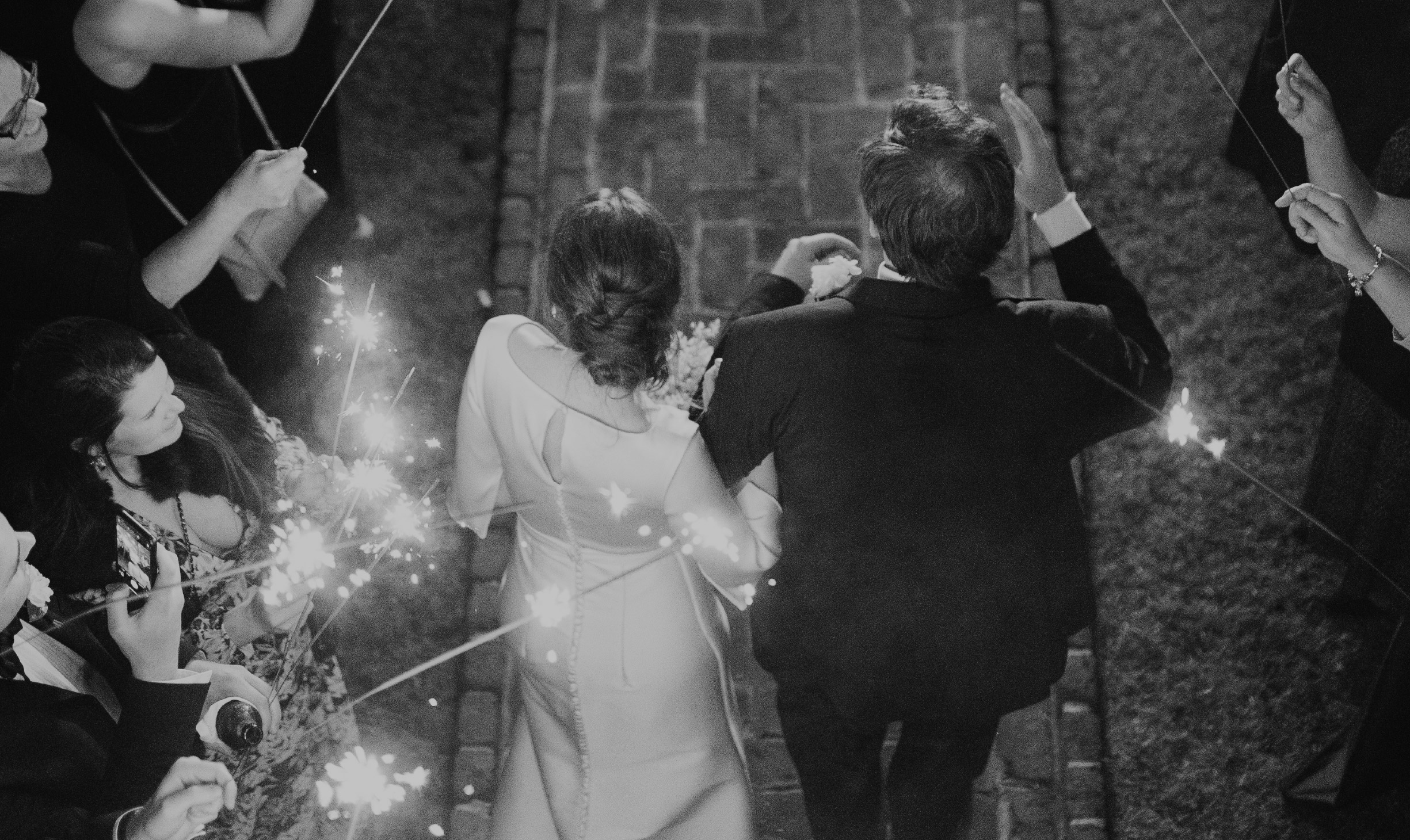